EGR Part 1: What is Exhaust Gas Recirculation and How Does it Work?

Auto manufacturers work hard to improve fuel efficiency and reduce emissions from engine operation and have engineered some pretty impressive ways of doing so. From turbocharging small engines to complex DEF injection systems on diesels, vehicles are emitting far less and going much further on less fuel than they ever have before. One of these technologies, EGR, also works to reduce engine emissions. Unless you have had issues with your EGR valve, you may not have heard of it. In this article, we are going to go over what EGR is and how it works.

EGR, which stands for Exhaust Gas Recirculation, is a system that diverts a controlled amount of vehicle emissions back into the intake. By introducing exhaust gases to the intake, the engine can operate while emitting fewer NOx gases.

Exhaust Gas Recirculation is an effective emissions control tool because it effectively lowers the temperature of combustion. Nitrogen makes up nearly 80% of the air we breathe and is normally benign. But when it’s exposed to extreme temperatures, such as engine combustion, it reacts, producing harmful NOx gasses which are then released as exhaust emissions.

Combustion is the result of igniting a mixture of air and fuel. Oxygen drives combustion. The more oxygen present in the combustion chamber, the hotter the burn, and more NOx gases will be released. By introducing exhaust gases into the intake, the chemical makeup of the air entering the cylinder is changed and has less oxygen. With less oxygen, the combustion temperature is lower, and fewer NOx gasses are emitted.

How Does the EGR System Work?

An EGR valve controls exhaust gas recirculation. The valve meters the flow of exhaust gasses from the exhaust manifold to the intake. The valve positions are open and closed. The degree of opening will vary depending on the conditions of operation. For example, at idle, the engine does not need to make a lot of power, so the valve will open up almost entirely. When you step on the gas, the valve will close to allow more oxygen into the cylinders, creating more power.

Diesel Vehicles have complex emissions control systems. There are two types of EGR systems that diesel engines can utilize, a High-Pressure and a Low-Pressure system. You will find EGR systems on diesel trucks like Duramax, Cummins, and Powerstroke, as well as passenger vehicles like Volkswagen and Audi

This system is “high pressure” because the recirculation occurs after intake air is compressed by the turbocharger, and before the exhaust gas enters the turbine. Due to the components’ close positioning to the engine, high-pressure EGR systems can adjust the EGR rate rapidly.

Additionally, because the recirculated exhaust gas is entering the intake tract after the compressor, the turbo is not exposed to soot and carbon deposits, preserving its function for longer.

High-pressure EGR systems are the most common diesel EGR design.

Low-pressure EGR is a newer technology that places the components on the low-pressure side of the engine (before the compressor and after the turbine). There are two main advantages to low-pressure EGR:

1.) The recirculated exhaust gasses have passed through the DPF (diesel particulate filter). The DPF reduces soot and particulate matter to passing through (and building up in) the EGR system and engine.

If you are having issues with your EGR system, the teams at Lake City Auto Care can help. We have locations in Hayden, Coeur d’Alene, and Rathdrum, and serve the surrounding communities!

In a future post, we will go over some of the common causes of EGR issues and failure, and the symptoms you may notice.

Our team members are ASE Certified and have the skills and experience to diagnose and fix EGR issues. Give us a call or schedule an appointment on our website today! 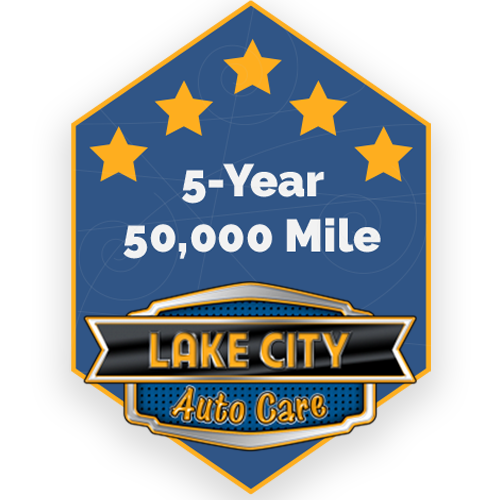